This should be one of those “news of the weird” type blogs.  I mean, it was weird enough that the Canadian athlete who kissed a hooker was testing positive for cocaine, which I blogged about here, but this one is just bizarre.  Get your coffee mug full and listen to this odd as all hell story.

Corporal Shelby Riggs-Hopkins has resigned due to this vary weird incident, as reported here. 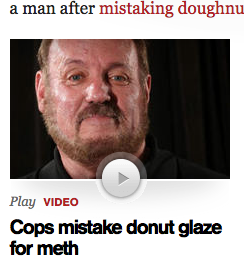 Apparently the officer was never trained in narcotics testing prior to arresting a man named Dan Rushing back in July of 2016.  The arrest charges were for methamphetamine possession.

Rushing, obviously innocent of the charges, was said to be insisting that the substance was merely sugar.

“I said, ‘That’s icing from a Krispy Kreme glazed doughnut and they went, ‘No, that’s drugs,’” Rushing told WFTV in October 2016.

A recently released report said that Riggs Hopkins was investigated and she did act in good faith, but didn’t properly complete portions of the drug test.

Two of the three tests were said to be positive, but the crime lab was unable to find drugs.

A consultant named Chuck Drago (by the way, that sounds like an action movie here name, doesn’t it?) stated that a field test CAN be wrong, and officers should seek out additional evidence in order to make an arrest.  He also added that a supervisor should have made light of the report and question it further.

The drug charge was dropped against Rushing, and a lawsuit was promptly filed against the city of Orlando.  (Rightfully so.)

The officer (Riggs Hopkins) later received training on how to perform these types of drug tests.  (Doh.)

Moral of the story?

Well, for me, I’m not ordering any donuts with glaze on them.  I’m not going to put myself in the awkward position to be arrested if some bozo officer is going to mistake that for a drug.  🙂