So Jon “Bones” Jones, the big MMA fighter who has been no stranger to controversy, just stirred up the pot again.

The lawyer for Jones stated on this website report that the supplement he was taking was contaminated. 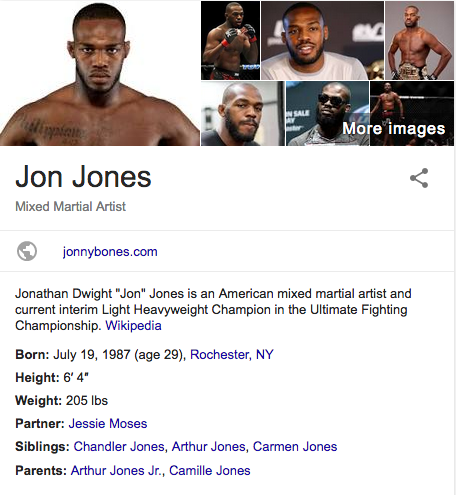 Jon Jones Lawyer Pops Off About Supplement Being Contaminated

The UFC and the light heavyweight champ of the world have had at it in recent memory.  I talked about it on this page a few weeks back when Tito Ortiz called him out.  I also talked about drugs and how that pertains to Chael Sonnen.  It’s been one heck of a time trying to keep up with all the UFC and MMA news that has to do with drugs!

If you recall, Jones tested positive for banned substances prior to UFC 200 this last July.  He also has said that he’ll be back soon (insert terminator voice here).  Well, the reason he’s saying he was suspended for a banned test is based on the fact that he took a generic form of the erection pill Cialis.  That’s why the 29 year old fighter came under scrutiny initially.

So will he be exonerated?

Well, it’s hard to say.  He’s been a dominant force in the UFC and one of it’s stars.  It’s hard to think that they won’t want him back.  Howard Jacobs, his lawyer, says that independent tests that were USADA (US anti doping agency) administered on the products he took came back positive.  The entire crop, in fact, was marked “Contaminated.”

I think that’s enough to eradicate the suspension and get him into the ring.  What do you all think?

I wonder if one of these products would have cleared the drug test in the first place?

I don’t really recommend products unless I personally use them and beat a test with them.  While these work for cocaine testing, marijuana, and more, I’m not sure if they will beat a generic form of Cialis, but let me get back to you on that one!

Lastly – why is he taking Cialis?  LOL