Clomid, Clomiphene, and Clomifene are other names for Hydroxyclomiphene. Women are prescribed this drug as a fertility aid. Strangely, this same drug is used by men whose testosterone levels are too low.

Side effects most commonly reported relate to the use of this drug by women. In men, it is frequently taken to prevent side effects of taking other steroids. This is not an anabolic (muscle building) steroid but is sought after by bodybuilders, wrestlers, and fighters.

Controversy in the Sporting World 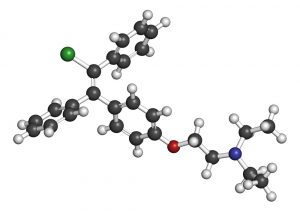 A man could be prescribed Clomiphene if he suffers from low testosterone levels. A doctor would prove this by calling for blood samples, but suspicions would be aroused by:

When one does not produce the correct level of hormones, whether estrogen or testosterone, the entire body suffers in numerous ways. Men without correct levels of testosterone also have problems with fertility. A husband and wife might be prescribed the drug at the same time to promote healthy sexual relations and the ability to have children.

Any drug which is banned by the USADA (United States Anti-Doping Agency) is added to this list for good reason. Clomid gives sporting professionals an unfair advantage in the UFC ring, during wrestling matches, while boxing, and in any other area of sporting performance or training. Anabolic steroids interfere with natural testosterone production as one will often read in literature regarding these illegal supplements. Clomiphene re-boots hormone production.

As one can see from the list above, side effects of low testosterone are very challenging to deal with. Attempting to control any one of these symptoms without addressing the root cause (taking anti-depressants, for example) could potentially cause more problems than one solves or be ineffective. Isn’t it good to increase testosterone in otherwise healthy males?

There are side-effects to Clomiphene use, however, the most common one being blurry vision. Only a small percentage of the many thousands of users suffers from this problem, but short-term problems could cause serious harm and also interfere with sporting performance.

National and state drug control boards ban this drug in order to prevent this and all other potential side effects, but also because it is part of an illegal chain: take anabolic steroids, increase muscle mass, then potentially undo the damage by consuming Hydroxyclomiphene. Drug control agencies and sporting organizations want no part in this.

What Will Happen to Offenders?

Sporting professionals who have been charged with drug use are given the opportunity to prove their innocence as is the case with one UFC fighter recently. He claims his supplements were contaminated, although he might also have failed to read labeling correctly. If found guilty, he faces the potential of continued suspension with the possibility of returning to his sport eventually and will also be fined.

If you have been researching and found out you may be facing the same type of situation, I have some good info about passing drug tests on this site here.