Ecstasy is an illegal drug which first became popular in the 1980s, particularly among people who went to dance music clubs. The drug helped clubbers to stay awake for several hours as well as inducing a general feeling of happiness, euphoria and love for other people around you, even strangers.

The drug, which is also known by street names such as Molly, has the chemical name MDMA (3,4-Methylenedioxymethamphetamine). While it has many pleasant effects for the user, there are also risks associated with taking ecstasy — both physiologically and legally. 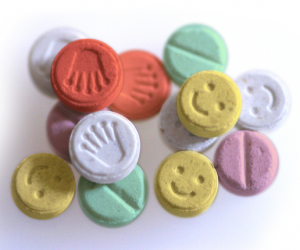 The pleasant feelings that users enjoy when they take ecstasy pills comes from the chemical serotonin. Ecstasy affects the brain by manipulating the neurons that interact with serotonin naturally; these neurons play key roles in regulating mood, which is why ecstasy makes users feel so happy and euphoric.

While ecstasy produces feelings of warmth and happiness in the user, there are also more unpleasant side effects to taking the drug. Short-term problems can include panic attacks, feelings of confusion and even paranoia. When the effects of the drug wear off, users can often end up feeling depressed.

If you take ecstasy, you should ensure that you keep yourself well hydrated, as the drug increases your body temperature. However, some users have been known to drink too much which can lead to problems in itself with the body’s natural salt balance.

There are also more serious side effects to using ecstasy. The drug has been linked to liver, kidney and even heart problems; people with pre-existing heart conditions or high blood pressure have been known to have dangerous reactions to using ecstasy. Users should be aware that ecstasy has been a contributing factor in the deaths of hundreds of people since it first started becoming popular.

People using ecstasy can also be outing themselves in danger because of the unscrupulous nature of drug dealers. The tablets they sell may not be pure MDMA, or they may not even be MDMA at all. Sometimes the active ingredient of ecstasy can be mixed with other chemicals, some of which can be damaging to human health.

While you can’t become addicted to ecstasy in the same way that you can with other drugs, users can build up a tolerance which means that they need to take more ecstasy or take pills more often in order to get the same pleasant sensation. Similarly, people can become dependent on the euphoric feelings produced by ecstasy which leads them to want to take it more and more frequently. 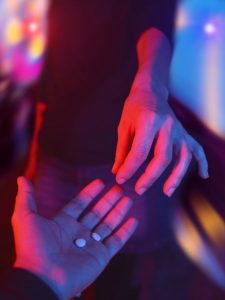 Ecstasy and the Law

Ecstasy is an illegal drug; making it illegal to manufacture sell or possess and use tablets or MDMA powder. In the US, ecstasy is considered a Schedule I illicit drug, in the same category as cannabis and LSD.

The US Government introduced new penalties in 2001 for those involved in the making, distribution and taking of ecstasy tablets; possession of just a few grams can lead to a prison sentence between 5 and 40 years. In the UK, ecstasy is a Class A drug, with possession leading to a prison sentence of up to seven years. Selling or even giving away the drug could see you spending life in prison.

It is also illegal to drive while under the influence of ecstasy, as it can affect your judgment and even your vision.

Ecstasy remains a popular recreational drug, but it is important to be informed about the potential physical and psychological side effects, both in the short term and in the long term. Users should also be aware of the dangers of using a drug like ecstasy, especially if they have any pre-existing medical conditions that may be affected by MDMA.

You should also know that while your friends may view ecstasy as harmless fun, the law takes a very different view, and even possession of a few tablets could see you being sent to prison or facing a significant financial fine.

And of course, if you have this in your system for whatever reason, read my info here about passing drug tests.