The drink Ayahuasca has been used by tribes in the Amazon region for centuries, usually as part of their religious ceremonies and activities involving the tribe’s shaman. The name comes from the vine which forms the principal ingredient of the brew, although its scientific name is Banisteriopsis caapi. Secondary ingredients added to Ayahuasca include Chacruna or Chagropanga, plants native to the Amazon basin which also contain a psychedelic substance called DMT.

Ayahuasca induces hallucinations and an altered state of consciousness in those who drink it, lasting up to eight hours. It also has some unpleasant side effects such as vomiting and diarrhea. 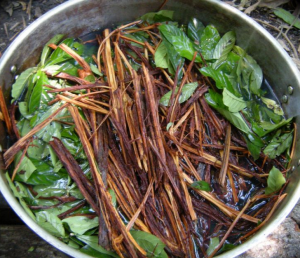 Historically, Ayahuasca has been used by the religious leaders or shaman of tribes in the Amazon region. Those taking part in the traditional ceremonies of these tribes take Ayahuasca in order to commune with nature or to diagnose physical or spiritual illnesses in a fellow tribe member; the idea being that the hallucinations and visions help the shaman to understand a greater truth about an individual.

In recent years, some people have begun to advocate the use of Ayahuasca as an alternative remedy for depression and other mental illnesses. Scientific studies have even been carried out to understand if the effects of drinking Ayahuasca can be beneficial to those suffering from depression or anxiety. There are two schools of thought about why Ayahuasca might help those with these conditions feel better; one is spiritual and one is more scientific.

The spiritual explanation goes back to the very reason that Amazonian shaman first started using Ayahuasca in the first place; that the effects of the drink help the individual to understand deeper truths about themselves and their condition, which will allow them to then work upon their issues properly once the effects of the ayahuasca have worn off.

The scientific studies have focused more on the effects of the psychedelic ingredient of the drink, DMT, which occurs naturally in the body. There is some evidence that DMT levels can be linked to the chemical imbalance in the brain which causes depression and anxiety, and therefore that drinking ayahuasca can work to restore or balance those levels. However, it is still early days for the scientific studies, and as yet there is no evidence that this theory is correct.

As with any substance which induces hallucinations, Ayahuasca should be taken with caution. Although it is not harmful if prepared properly, if you are planning on taking it you should do so in a safe place and make sure that there is someone to keep an eye on you and to ensure that you do not harm yourself while under the influence of DMT.

Some people may have extreme physical reactions to the drink; if this happens you should seek medical attention urgently. There have been some reported cases of tourists becoming seriously ill after taking Ayahuasca while traveling in the Amazon, usually because the mixture they prepare there is very strong.

Whether you are seeking to use Ayahuasca for recreational or medicinal purposes, it is important to understand the risks involved with this drink and with any psychedelic substance. Take the proper precautions and you should be able to take Ayahuasca safely, but always make sure you have someone with you who will take care of you in the event that something does go wrong.